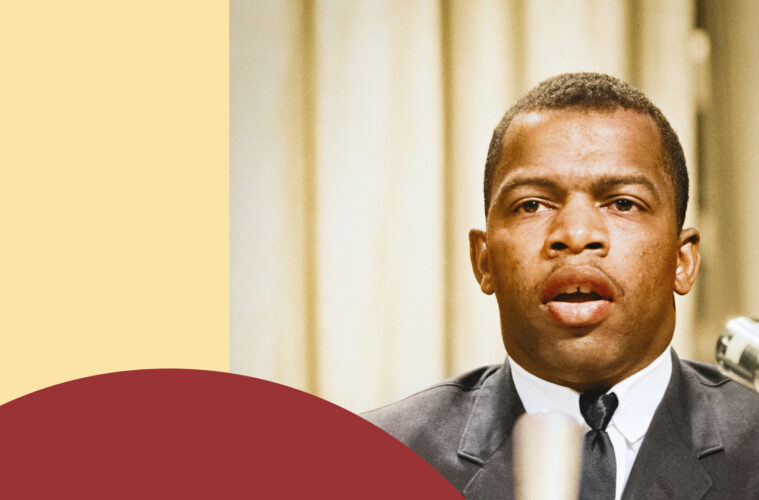 Saving the Soul of Our Democracy

During the homily given at Civil Rights activist John Lewis’ funeral in late July, Reverend Raphael Warnock, the pastor of Ebenezer Baptist Church which Martin Luther King Jr. attended and pastored for much of his life, drew a comparison between Jesus and John Lewis that made many uncomfortable. If you have yet to watch the entire sermon, I recommend you do so in order to understand the greater context of the following quote.

Warnock says the following just after the 8-minute mark: “We celebrate John Lewis. He was wounded for America’s transgressions. Bruised for our iniquities. The chastisement of our peace was upon him and by his stripes we are healed. Let’s remember him today and lets recommit tomorrow to standing together, and fighting together, and voting together, and standing up on behalf of truth and righteousness together. We’ll get through this together. Let’s save the soul of our democracy together.”

The widespread criticism of this statement no doubt stems from Warnock’s referencing Isaiah 53, a passage used also to describe Jesus’ role as the Suffering Savior. One glance at the comments beneath the video linked above reveals that many consider Warnock’s analogy a blatant heresy. In their eyes, by using this messianic language to describe John Lewis’ life, Warnock has claimed that Lewis’ wounds and sufferings accomplished salvation in the same manner as Jesus’ did. Surely, however, this is not the case, neither in Warnock’s mind nor even in the plain meaning of his quote.

Warnock employs a key phrase in Lewis’ messianic characterization to clarify what exactly his life accomplished: “He was wounded for America’s transgressions.” Warnock does not say ‘our’ as in the Scripture, meaning the collective whole of humanity in its broadest interpretation. Rather, he specifies that it was for America’s transgressions that Lewis was wounded, bruised, chastised, and scarred. In other words, John Lewis lived his life as a willing sacrifice, holy and pleasing to God, engaged in a lifelong, non-violent pursuit against the great American sin of racism.

Lewis’ life can serve as an example for those committed to the social and spiritual healing of our nation.

At best, then, John Lewis is a moral exemplar (which for most evangelical Christians is the worst or most limited model of the atonement), and this only when it comes to fighting against the powerful forces of racism and injustice in our country. The fact that John Lewis was physically beaten numerous times alongside figures like Martin Luther King Jr., yet persisted until real, substantive changes were made in our democracy that better image the Kingdom of God, confirms that Warnock’s controversial analogy is true when understood as intended.

Yet for many, I suspect, this explanation will not satisfy. Fortunately, this is not an unprecedented analogy.

I recently discovered Audrey Assad’s song, “Your Peace Will Make Us One,” not long before first hearing this quote from Rev. Warnock. This hymn, itself a rewritten version of the “Battle Hymn of the Republic,” is a beautiful rendering of a non-violent God who, through the way of peace, truth, and love, brings about His sovereign plan of reconciliation.

After listening to it several times through, I thought to compare it to the hymn upon which it is based – a hymn I sang many times growing up in church. The first recording I listened to by Highlands Worship struck a deep chord in my soul.

I was simultaneously surprised, impressed, and discomforted when, at about 2 minutes and 45 seconds into the song this Christian worship band incorporated the tune of the Star Spangled Banner into their arrangement whilst singing the lyrics of the hymn, followed by the repeated refrain of “Glory, Glory, Hallelujah!”

The unholy alliance between Church and State never sounded so good.

“The Battle Hymn of the Republic” was originally written during the Civil War in support of the Union that was fighting to end slavery in America. Immediately, not having listened to it for several years, I was struck by the violent language employed throughout the hymn. In fact, it glorifies violence. Its original lyrics first submitted to The Atlantic magazine in 1862 by Julia Ward Howe read as follows:

Mine eyes have seen the glory of the coming of the Lord:

He is trampling out the vintage where the grapes of wrath are stored;

He hath loosed the fateful lightning of His terrible swift sword:

His truth is marching on.

I have seen Him in the watch-fires of a hundred circling camps,

They have builded Him an altar in the evening dews and damps;

I can read His righteous sentence by the dim and flaring lamps:

His day is marching on.

I have read a fiery gospel writ in burnished rows of steel:

“As ye deal with my contemners, so with you my grace shall deal;

Let the Hero, born of woman, crush the serpent with his heel,

Since God is marching on.”

He has sounded forth the trumpet that shall never call retreat;

He is sifting out the hearts of men before His judgment-seat:

Oh, be swift, my soul, to answer Him! be jubilant, my feet!

Our God is marching on.

In the beauty of the lilies Christ was born across the sea,

With a glory in his bosom that transfigures you and me:

While God is marching on.[1]

The last line is particularly striking in light of the outrage against Rev. Warnock’s sermon. I could safely assume that most, if not all, who voiced concern about messianic language being applied to John Lewis have sung these lines comparing Christ’s salvific work to the cause of the Union soldiers.

“As he died to make men holy, let us die to make men free” sounds rather like the comparison Warnock made in his sermon between Christ and Lewis. It was not all people’s salvation but an American political cause for which Lewis was willing to lay down his life, like so many of his co-laborers in the Civil Rights movement and those Union soldiers before him.

What’s striking to me, however, is that the manner by which Lewis went about his work better reflects the historical, nonviolent Jesus we read about in the Gospels than those Union soldiers who participated in a tragically violent war. In fact, nonviolence and opposition to military service was one of the key markers of Christian identity in the pre-Constantinian church! Why, then, does messianic language make sense for the soldiers but not the peacemaker?

Willingness to undergo suffering on behalf of another, even to the point of death, is no doubt admirable and for that, all those in the military, past and present, should be commended. Christ himself did so on behalf of all humanity and it was He who called us to take up our cross and follow him. The Christian invitation is an invitation unto death. It is not an invitation to take up arms, but to lay them down even if it means death. For the Christian hope eclipses death, promising us an everlasting life in the presence of God. The way of the Cross, however, looks nothing like the way of the soldier, for it was the soldiers who beat Jesus and nailed him to the cross, gambled on his clothing, and mocked him as he died.

John Lewis fought for a better future, as did the Union Soldiers before him, and each found some measure of success in their time. The work, however, is not yet done, and if it is to be done in a way consistent with the life of Christ, its anthem cannot be the Battle Hymn of the Republic. If peace is to be our end, then peace should be our song.

You are speaking truth to power, you are laying down our swords

Replanting every vineyard ’til a brand new wine is poured

Your gentle love is patient; you will never fade or tire

In the beauty of the lilies, you were born across the sea

With a glory in your bosom that is still transfiguring

Dismantling our empires ’til each one of us is free

– (Your Peace Will Make Us One by Audrey Assad)