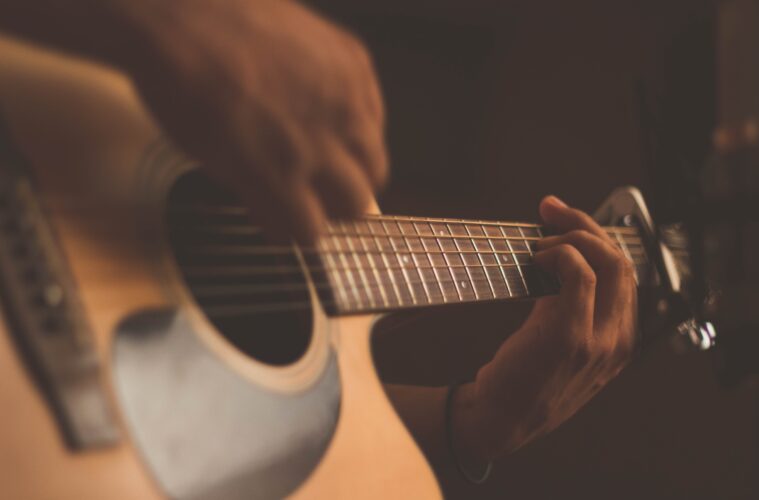 The Folk-Punk Gospel of Friendship

“Show me your friends, and I will show you your future.”

In my church youth group, this phrase was preached to warn teenagers about the dangers of negative influences. Although well-intentioned, it encouraged transactional relationships for personal gain while simultaneously urging youth to repress their problems among peers and choose friends based on outward appearances. Years later, I stumbled upon a different phrase, a lyric, that encouraged true solidarity among friends — a sentiment that seems central to the early Church:

“I don’t see me mad at situations; I see me turn and walk away.

I see a tattoo on my right thigh that I will probably regret one day.…

But now I am happy to be bonding in a kitchen with my friends.

A spool of thread, a few more good vibes, a safety pin, and a ballpoint pen.”[1]

My introduction to folk-punk came through these opening lyrics to the Front Bottom’s music video of “Backflip.” While these lines describe the singer coping with “situations” by having his friends tattoo him with a do-it-yourself tattoo kit, the video shows friends engaging in other deadly hijinx. To be clear, the video is crude, irreverent, and discomforting, yet deeply honest about the salvific and insidious sides to friendships. Despite its destructive or nonprofessional outcome, the singer commits to playfully creating with friends because the novel byproducts of being with friends can be more existentially valuable than the products produced by professionals. Although a DIY tattoo doesn’t seem to have much relevance to the Church, whenever friendship networks utilize DIY ethics to resist oppressive hegemonic systems (as is often the case in folk-punk communities), one can begin to see parallels to the teachings of Jesus.

This statement by Jesus comes at a particularly important part in the Christian narrative, just after Jesus had washed these friends’ feet and hours before his betrayal and abandonment by these same friends. In a few hours, a lonesome Jesus would be crucified by authoritarian systems accusing him of blasphemy of God and treachery to the empire. If one were to pause here, they might perceive this entire episode as a tragic mockery of friendship. However, on the other side of the cross, these failed friends reinvigorate their fidelity to Jesus by founding a DIY community in the Spirit of their forsaken friend, whom they proclaim “Christ.”

However, before venturing further, we should pause here and consider how people and communities affect each other. The theologian Paul Tillich noted that Jesus is only “Christ” when he is received as the “Christ” by others, his Church.[2] Tillich makes this claim because any individual’s personhood (e.g. Jesus’ identity as Messiah) is contingent on their participation in a community that is receptive to them. However, initially Jesus’ community did not receive him as ” the Christ” but rather abandoned, forsook, and condemned him because he did not fit into the role that society’s hierarchy had for him. This suppression of people’s individuality backs folk-punks’ suspicion of hegemonic structures. Instead,  these groups prefer the receptive openness of egalitarian friendship networks. To some readers, a friendship network may imply a politically apathetic and naively optimistic movement, but as the life of the Church exemplifies, fidelity among friends is not passive but dynamic, antagonistic, and subversive.

Much like friendships, the Church is not a static entity but rather a dynamic community struggling to remain faithful to their friend’s final wish for them to “love each other…” The Church’s antagonism first begins in its foundational dogma to receive their friend Jesus as the “Christ,” despite the dominant structures’ condemnation of him. However, this foundational dogma eventually leads the Church to call into question the entire hegemony by proclaiming that the forsaken one was not only “Christ” but God incarnate. Thus, when early theologians such as Irenaeus write, “God became man that man (sic) may become God” they are theologically overturning the established hierarchy of power because the Father has emptied its power into the egalitarian community of the Holy Spirit. When the Church receives the “least of these,” it operates in this Holy Spirit and generates revolutionary power by exposing the ruling systems’ impotence to account for the friends of the community. However, some may immediately point to the facts of the Church’s own historical abuses of power, and they would be right. If Christ is only the Christ, if he is accepted as Christ, then the Church is only the Church of Christ if it receives those who are forsaken as though they are the coming of Christ.

Much like friendships, the Church is not a static entity but rather a dynamic community struggling to remain faithful to their friend’s final wish for them to “love each other…”

As the contemporary theologian Nimi Wariboko highlights, friendship networks can be a compelling alternative to hegemonic structures. [3] These networks are democratic spaces where friends “conspire” or Spirit together. Unlike hierarchical structures that require participants to conform to prefabricated roles, a friendship begins with the simple but profound exposure of one’s self to the other. Although it is a vulnerable position that relies on trust, friendship empowers both individuals to assert their unsuppressed individuality. Thus, friendship is a space for unsuppressed authenticity and respect and an opening for novelty and collaboration. Although friendship is a messy space filled with conflict, authentic fellowship anticipates conflict while rejoicing in the novel transformation conflicts bring to both parties.

Although it is a vulnerable position that relies on trust, friendship empowers both individuals to assert their unsuppressed individuality.

To be clear, the Church has seldom structured itself as a true DIY friendship network; however, folk-punks often work within these networks. Take for instance these lyric by the folk-punk musician Patrick Schneeweis (Pat the Bunny):

“We’re building a new world, all of my friends and me

It’s not an exact science yet, but we have the technology”.[4]

In this song, a drug-addicted Pat laments society’s failure to address drug addiction, mental illness, and food insecurity in his community; society instead prefers to scapegoat Pat and company as “criminals.” According to Pat, he doesn’t want to “kill a cop,” but instead hopes for “neighborhoods where they don’t have to get called when the shit goes down cause [their] friends, they are enough, and [their] neighbors have enough.”

Years later, a sober Pat would confess that his journey to sobriety was largely due to his friends who loved him through his struggles, and thus singing to these friends, he closes out the album with the words, “maybe ‘God’ isn’t the right word, but I believe in You.”[5] The solidarity of these lines inspire a deep fidelity to one another, and I can’t help but imagine early Christians making a strikingly similar statement regarding Jesus.

[1] “BackFlip”  by the Front Bottoms on Talon of the Hawk. Link to Music video